Thanks mainly to Hurricane Sandy there was enough water to run the Mother’s Arms Challenge this year.  The water stage is about 2.7 which is close to a minimum level to make this race even possible for much of the LMSA fleet. As it was we managed to find at least one spot where the water was a little thin. 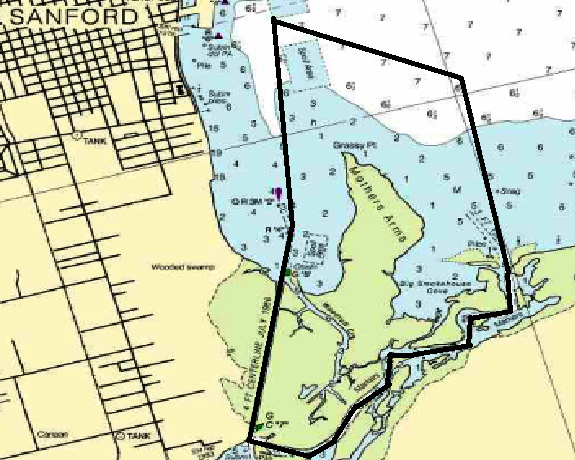 Stay out of the muck and the weeds if you can

I rode to the Lake with Denise ‘cause my truck has to have new brakes. I was not particularly excited about sailing but I said I said I would do the scoring. Pam Loughlin measured the wind at a sustained 14 knots but Lake Monroe is only about nine feet deep at this stage and the waves make it look much worse.  It was cloudy and cold enough for socks, which is outside my comfort level. The sky opened up a spot or two of bluish but I was thinking seriously about waiting at Wolfy’s and drinking Irish coffee until everyone was done being cold.

At the competitor’s meeting, Jerry Brinton and his daughter Lauren asked if I wanted to sail with them and I had a moment of hesitation, the Irish coffee idea was beginning to take hold.

Sail Gator is a S2 7.9 in immaculate condition, and the 7.9 is truly one of my favorite boats of all time. I wish I had kept the one that I sold when I bought the Loose Cannon. I still would have acquired the Loose Cannon, but I could have kept Wild Turns, it would have been O.K. At the dock we tied in a reef, and then headed out to the start line.

Race Committee is a tough gig. Far be it from me to cast aspersions on anyone that assumes that responsibility unless, of course, they happen to be my very good friends, 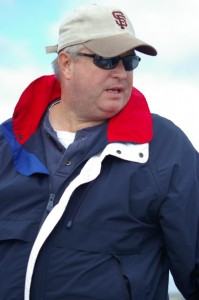 Mike and Pam Loughlin and my wife. Again, not to be critical, but usually the start line is set in water deep enough to have the keel at least part way down. I am sure that this was just an extra little challenge thrown in to see how many boats could make the windward start line in fifteen knots of breeze with no keel. We were late to the start line by over a minute and crossed the line as we raised the jib. After a short beat on starboard we tacked below the layline to the mouth of the river, hoping to get lifted. Andy and Fisk apparently managed to cross the start line on port and get lifted all the way to the opening. We were too close to Mother’s Arms to risk that line even with the keel only part of the way down. 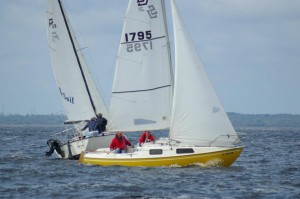 Slipping into the river behind  Ha Ha the other Precision 23 of Byron Hicks and DJ McCabe, the reefed mainsail was called into question. The possible consequences of having too much mains’l in the government cut or once we returned to the lake won out for the time being. We left the reef in. Easing the sails and bearing away just before climbing into the cockpit of the Precision allowed Sail Gator to accelerate through the Ha Ha wind shadow.

In the second short cut, the already partially retracted dagger board grabbed a big chunk of swamp bottom and Sail Gator stopped. I reached the winch first and got the board to move a little as we could hear the Precision getting closer. Lauren came from the bow and took over the winch handle, I grabbed the line to “tail” and Jerry steered us to a little deeper water, all before Ha Ha got on top of our air. We could see Fisk and Paulie flying the spinnaker on Old Yeller the San Juan 21. 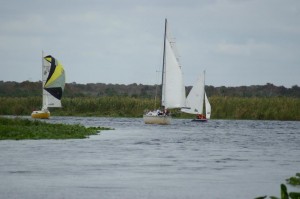 Andy with his crew of Johnny Yannish, Diane Forrest and Maryann Carter had the infamous whisker pole stretching out Show Me’s genoa. Removing the reef was a unanimous decision at his point, and it did help. Ron Semans and Brent Carter were staying with Show Meon the Laser 2. All three of them rounded Willie’s Roost into the government cut before we could see it. Willie’s Roost is a corner upon which I have perched in previous excursions around Mother’s Arms. 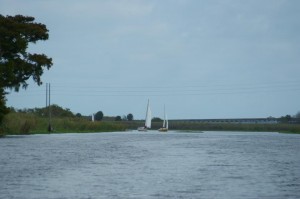 Right there under the bigger boat

By the time we reached the cut, Ol’ Yeller’s spinnaker had passed Show Me’s pole, and the Laser 2 was having to short tack in the channel because they just did not have the momentum to punch through some of the wind shifts. 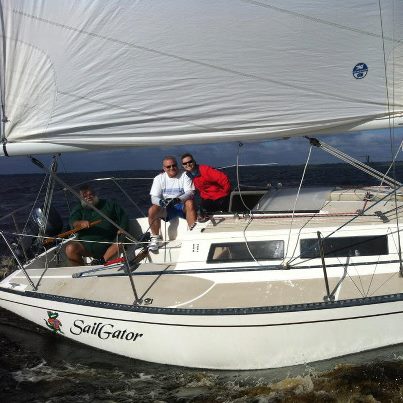 Sail Gator weighs in at over two tons even without rail meat, momentum was not the issue. Not enough time to catch anyone so we finished fourth.

met us as we returned from a leisurely reach across to the western shore of Lake Monroe after we finished, and we had a little close order drill type exercise before docking and gathering at Wolfy’s for the scoring ritual.

One thought on “Mother’s Arms Challenge 2012”