To race this weekend is the plan, and not to be an also ran

Wednesday night we’d race for rum, and test the boat for things to come.

Added tweakers, sheets, a pole, cut the tiller and filled a hole,

When the kite was in the air the wind came in from who knows where.

The kite was quickly highly loaded, we doused before the mast exploded. 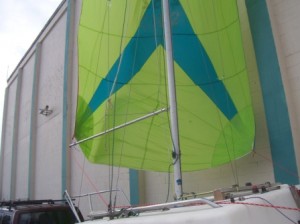 We set the chute in the parking lot.

It needs more cleats and turning blocks, but not tonight, we left the docks.

The wind was light, the temp was fine when we crossed the starting line

They went back, we followed suit, it’s a lot more fun with two.

This time clocks were started ticking, Timex, you know, takes a

The mighty Box of Kittens roared, we even remembered to lower the board.

The left, the current, now clear ahead, but out in front the wind was dead.

The Viper and the 29er were soon out there where the wind was lighter,

we kept up well for a pretty good while, behind was Fisk that made me smile.

Eventually the wind just died, once again the forecast lied.

Hour and a half and still no mark, by now the time was half past dark.

The 29er was even slow, we offered a line, they did not say no.

Just enough fuel to reach the channel, drop the tow and find the paddle.

Later at the bar for scoring, we all agreed, it was almost boring.

The Viper finished in 1:42, the other eight did ultimately make it off the lake.