This regatta has been going on for a long time. I started sailing in 1985 and it had been around for several years already as the Tangerine Bowl Regatta and possibly some other names. I suspect there are a few sailors around that could take us all the way back but they refuse to admit it. The first weekend in December has been home to the famous seven hundred boat Red Lobster Cup and the nearly as large Citrus Sail fest. The infamous S.L.O.B.S. Fest made its mark at the turn of the century. For the past eleven years, the Lake Monroe Sailing Association has hosted the Kettle Cup and what follows is a summary of this year’s event. If you missed it, we are really sorry and we waited as long as we could, but in the end we went ahead and had a great time without you.

Friday the last of November contained all of the necessary and generally anticipated drama. Will there be enough late registrations to make the numbers? How many volunteers will bow out at the last minute? Where are the tents? Will there be enough Catalinas for a class? We have been here before.

By the start of the first race on Saturday December 1, all the issues were resolved and even the weather looked great. I had been booted off my intended ride, but Andy Forrest had mentioned earlier in the week he needed crew and after a couple of, “I got somebody” and “ now I don’t” conversations, I landed at the helm of Show Me. My position as helmsman is mostly dependent on the fact that Andy seems to prefer doing everything and driving is kind of dull compared to being everywhere at once.

Our open Portsmouth class started first with the Catalinas and as predicted at the skipper’s meeting the Catalina class bunched up at the committee boat end of the start line. 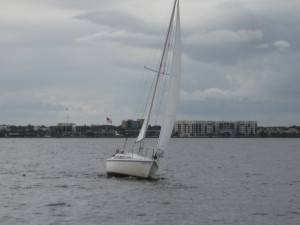 Don Hoofring’s Catalina 27 Free Spirit was in our class and coming in high and hot to the stern of the RC boat. Since it looked as though I was going to be shut out at the line, and I was below him I suggested to Don that he might want to reconsider. As I luffed sharply to drain off a little speed prior to having to choose between Randy Pawlowski’s outboard and the transom of the RC, Don headed up and tacked away. Dropping back in behind Randy worked ok. We were a little slow, with a clear lane to the right so as soon as we passed the RC anchor rode we tacked.

Jeff Herter’s Vulcan Mermaid was at the pin end and getting gassed by the Catalina’s which held him back for a while. By the time we converged at the windward mark the Mermaid was ahead by a few lengths. 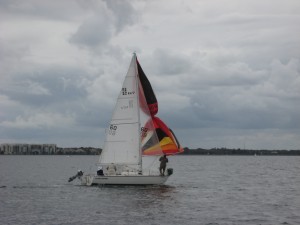 Their wasp waisted spinnaker gave us the time we needed to park Show Me’s sail plan directly upwind and we made extra effort to stay exactly there all the way to the leeward gate.  From the gate we followed the Vulcan Mermaid for a short distance but the pressure looked better on the left side of the course.  Show Me came about and immediately started to wiggle through the congestion of the rest of the forty boats on the course. It was the correct move, by the time we set the pole for the final run we were well ahead. 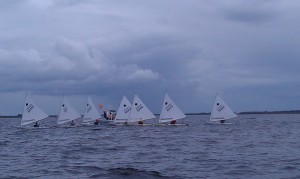 Sunfish take a surprising amount of space for being so little, but we avoided confrontation well enough to finish without penalty, and were pleased to have to wait for the Vulcan Mermaid to finish. I am sure that it was only my evil side that took such pleasure in that. As the San Juan 21 class got close to the finish, it was very exciting to see the blue spinnaker of Pete Owens out in front of Fisk Hayden’s red one and Kyle Everly’s white one. Pete is relatively new to the SJ 21 fleet and the competition is as tough as it comes. The Sunfish fleet finished with Joe Blouin in front followed by LMSA’s own Mindy Strauley in second and Pauley Strauley in third. Titusville’s Brad Ruffe had aced the Catalina Fleet followed by LMSA member Randy Pawlowski. The Raiders were led by Dave Ellis, and the open planing class was being dominated by the Buccaneer’s. A small little rain cloud had blown down the course and had helped the wind for us. 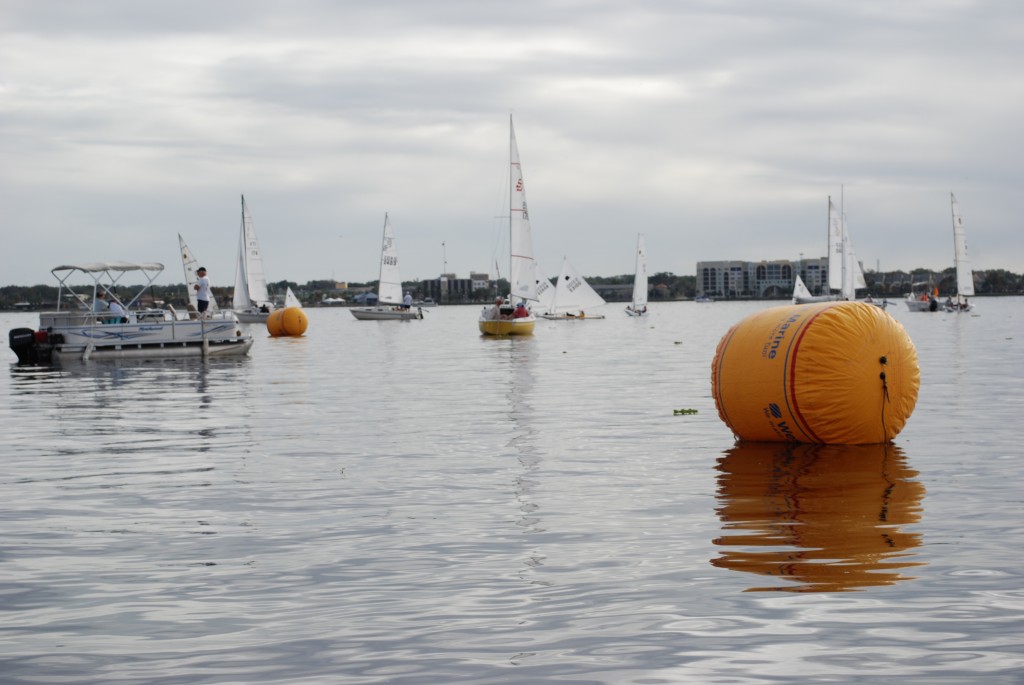 the wind was stolen by a rain cloud

Within minutes, as sometimes happens on Lake Monroe, the wind followed the tiny little rain cloud all the way off the lake. After an hour or more of staring at ourselves in the liquid reflector, the RC weighed anchor and competitors gathered at the tents near Wolfy’s.

Sunday started with no wind, but John Fox was in tune with the weather and anticipated the general wind direction which allowed for a quick course set. The Vulcan Mermaid had acquired an additional crew member in the person of Sharon Balsam, a recent graduate of U-Sail. Show Me picked up a dock wanderer in the person of Steve Hayden, world renowned Lightning Class champion. Seemed like a fair deal to me.

In the first race we started within inches of the Vulcan Mermaid stern rail with two Catalina 22s just to windward. Stuck as it were, no real place to go, just hang on, go fast, and pay attention. When the Catalina 22’s tacked away, we gave them a little room and then followed them out to the right, with clear air, good pressure and boat speed. By the time we crossed the competition, Show Me was out in front far enough. The second race was mostly about wind shifts and dodging Sunfish. The wind was much lighter, and I was concerned that it might quit like Saturday. Andy’s eternal optimism and the fact that Steve Hayden sees wind shifts in high definition Technicolor may have helped us in race two. Show Me had a couple of surprises, like Don’s Free Spirit driving past us like we backing up. The Catalina 27 needs more air downwind so we got it back on the run. The Vulcan Mermaid had some problems at the leeward mark besides running over a Sunfish. The imaginary string of that track would have tied a double bowline on a bite. We managed to eke out another bullet.

Race three almost started with Show Me well behind the line on a port tack, but real fast. A big wind shift, a capsized raider in front of the line, and last minute postponement, took away what I think would have been another big win.
I was too far out for the real start of the third race, and “a big lefty” pushed the bow too far down from the line to make it on starboard. I tacked a little early and had to pinch to miss the RC boat. We had enough speed to listen to John Fox say… “I have a long anchor line, I have a long anchor line, I have a long anchor line” prior to bearing away to power up. Vulcan Mermaid had started at the pin and several lengths ahead. The pin was quite favored because of the “big lefty” and the Mermaid looked to be in a dominant position. Show Me gained a little and by the last leg had shaved enough seconds off of the Mermaid’s lead to be within the handicap differential.

Shore side festivities were quite successful this year. The raffle and the silent auction should provide a great boost to the money being donated to the Salvation Army of Seminole County. Special thanks to Charlotte Jackson, Mary Jevitt for taking that on, and Paulie Kaiser, Kristen Cole for selling raffle tickets.

The amount of effort that it takes to pull this off is large. In addition to those mentioned above, I offer my personal appreciation to Mike, Pam, Andy, Diane, Fisk, Bob, Matt, Marty, Denise, Jerry, all the sponsors, contributors, contestants, John and Nancy Fox, Fred and Maggie Shoemaker, Bob Johnson, Vic, J.C., Rebecca, Mike McKeown and most importantly all those people that I have neglected to mention.