I was apprehensive and agitated for days, made myself sick trying to be prepared, all at the last minute. It got to be a chant, even though I couldn’t hear it. Adapt, improvise, and overcome. I wanted to leave Thursday and spend a day and a half with the boat in the water. Not this time. We left Longwood 7:59 Saturday morning. Denise and I, with sons Thor and Orion, and two of my crew from Nationals, DJ McCabe and Dan Mestayer and a boat loaded with more stuff than an F-31 should ever be loaded with arrived in Stuart at noon. 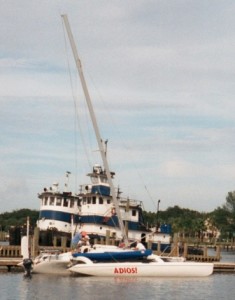 Glenn an Nelson step the rig

Glenn Howell and Nelson Wright pulled in shortly thereafter. Bob and Sharon Harkrider with Phil Taylor and Margaret Towe arrived later in the afternoon towing Training Wheels. Pete Marriott appeared on Training Wheels sometime later in the trip, I have no idea when or how. There was an F-boat trailer without an F-boat in the parking lot. I think it was Bob Underwood and family on Blue Bayou. John_ and Dan_ (I’m sure they have last names, I just don’t know them) arrived with Orion (the F-27, not my son) in tow. Harkriders, Howell and we planned to start across Saturday night. Orion’s team planned to wait for daylight.

It was almost midnight by the time we headed out. The inlet was new to me so I let the old salts lead. A few quick turns to keep the greens and reds on appropriate sides and we were outside the Port St. Lucie inlet. What wind there was came head on. The Yamaha provided propulsion. Waves were two to three feet with a light chop.  Both my experienced crew assured me this was real easy going. We stayed in sight of the Harkrider’s Training Wheels but Howell and Wright on Adios! seemed intent on proving the name was appropriate. We skirted a couple of storms and just after daylight we crossed on to the Bahama Banks. Another storm was brewing to the north and displayed a huge waterspout just to keep me alert I’m sure. Late in the afternoon we tried a mediocre version of the two-anchor technique in the lee of Mangrove Cay. A large thunderstorm insisted that all six of us make our nests inside the F-31R. We were very good friends before, now we are family.  During one of the many times I was up in the middle of the night it looked as though I could read the Vessel I.D. on Training Wheels. Dan (Shade Tree) pulled the hooks and we added some distance between us and our friends, while we were still friends. This time we put down the 22 lb Delta and backed down hard with the Yamaha, offset the rode with a line to the starboard float and we were comfortable the rest of the night. Our anchoring procedure was established. 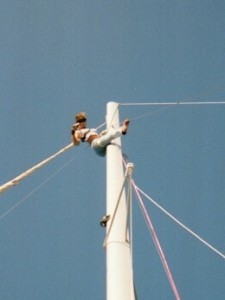 After dumping a pot of coffee on my foot, then making more, and then running DJ up the mast to retrieve a jib halyard with a failed splice, we left Mangrove Cay about mid-morning just ahead of another nasty squall. Note to self and anyone reading: make sure your splices in high-tech line are sewn or at least recently inspected. The post-squall the wind went to zip, and we motored behind a trawler until we needed gas. We caught Training Wheels leaving the gas dock and Bob was kind enough to give me and my empty gas cans a lift. My first meeting with Bahamians was great. They decided I had cool hair and suggested that I was a “big guy” (imagine that). I was pleased when the patriarch of this family operation decided I was just a medium. I did not argue because he stood about 6’8” and tipped the scale, over. From there we went to Alan’s Pensacola and anchored. We would make Green Turtle Cay on Tuesday. The good times really began with a fifteen knot reach for the last 2 hours into the Green Turtle anchorage. Just as we got the dinghy inflated, Adios (!)? called on the VHF, “What are you guys doing out there? We’re tied up to a palm tree about 6 feet from the beach”.  Shade Tree dragged up the hook and we went into the beach. I missed the Customs agent so that had to wait until morning. When I did get to him, he was very kind. I think the fact that only one of the six of us had signed our passports was enough for him to be sympathetic and condescending. 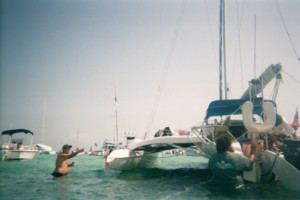 We did finally plant feet on Green Turtle. We ran into Bill Terrell on our shore quest for breakfast, a friend we hadn’t seen in some time. Bill sails an Endeavor 43 named Mariah, destined to become our tender. The first event in RTIA is one island north of Green Turtle. We dropped a hook in bright green water chest deep over a sand bar. 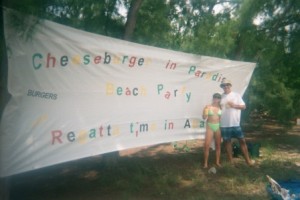 Available on the beach were cheese burgers and rum drinks; good party. The first race was on Thursday.

We started well enough but were too low. The wind veered and we didn’t, which took us to the back of the pack. Light to no air near the leeward mark held everyone back and we made some progress sailing in every direction but toward the mark. Suffice to say it wasn’t a great finish. Adios!, Training Wheels, Lucky Star, Electra, Blue Bayou, and yours truly, Loose Cannon.

Friday morning Denise escorted Orion to the airport on Treasure Cay by ferry, so he could fly back to the U.S. for a previously scheduled Boy Scout obligation. The rest of us  took the boat to the harbor on the South end of the Treasure Cay. We debated flying the chute into the marina but one last grain of common sense kept us from being embarrassed. After a drink at the Marina bar and a delightful swim in the Marina pool we tested the capabilities of the dinghy. It  worked well, our butts were wet all the time anyway… on to the boat and on to Great Guana Cay.

Navigating in the Abacos is easy by GPS and cruising guide. From waypoint to waypoint keeps you away from places like “Don’t” rock. We made it to Great Guana in the late afternoon, anchored near the beach and made it ashore for the party at Nippers. 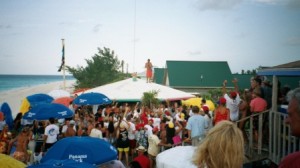 Quite a place, Nippers! An opportunity for crew too long afloat to become unruly and some of them did. It is enough to say that DJ’s new nickname is Sparky.

Saturdays Race was just off Great Guana and we were again unimpressive. Wrong spinnaker, sailed too high, went slow, finished poorly; I love sailboat racing. I think we went to Nipper’s again but that part of the trip is a little foggy. I remember anchoring just a little too far out and riding a medium chop most of the night. The breeze was comfortable, the bugs were down, and I am sure I slept at least a couple of hours.  Sunday got us in to Marsh Harbor about the same time as the freshest little squall we saw in the whole trip. At the mouth of the harbor, directly on the nose, I estimate 30-plus knots to be conservative. The water was flat and we were already motoring so it was easy. Rain drops stung but were short-lived. 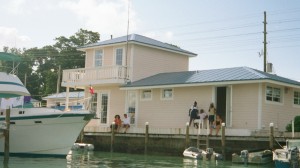 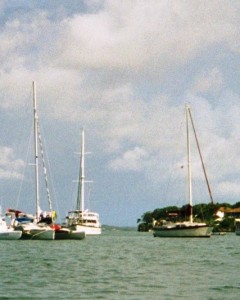 Mariah was already  anchored, so we asked Bill for directions to the laundry. Snappa’s was new and had everything we needed. It wasn’t quite close enough to load the machines from the dinghy, but almost. Marsh Harbor was fun and  provided a complete anthology of new stories.  We raced two of the last three races over the next week. We progressively stored more and more stuff onto Mariah and her dinghy until we lightened up enough for a good start and had a reasonable race. We spent one day in Hopetown being tourists. 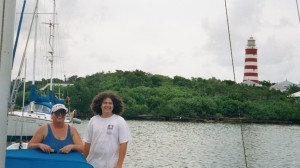 Denise, Thor, and the Hopetown lighthouse

Too soon was the time to return to the launch site. First night toward home was Sale Cay, anchored about dark, rested, left at 8:00 A.M. for West End. Beautiful day, winds out of the south, close reach in 8 to 10 knots. After noon Training Wheels called on the VHF and said if we sailed straight into Stuart we could make it by midnight with current conditions. Crew made their wishes clear enough so we prepared to cross the Gulf Stream while we were under way.  Deflated and folded the dinghy then repacked everything that would fit around the keel trunk and forward. By the time we were ready to be in the Gulf Stream, we were. Training Wheels had been towing her dink and still making time on us. Training wheels was double slotted (screecher and jib both drawing nicely), and we were being horizoned, literally. We motor-sailed to catch up and then realized that we were making exceptional time. So I let the motor run. 13 to 15 knots all the way across the Gulf Stream according to the GPS. 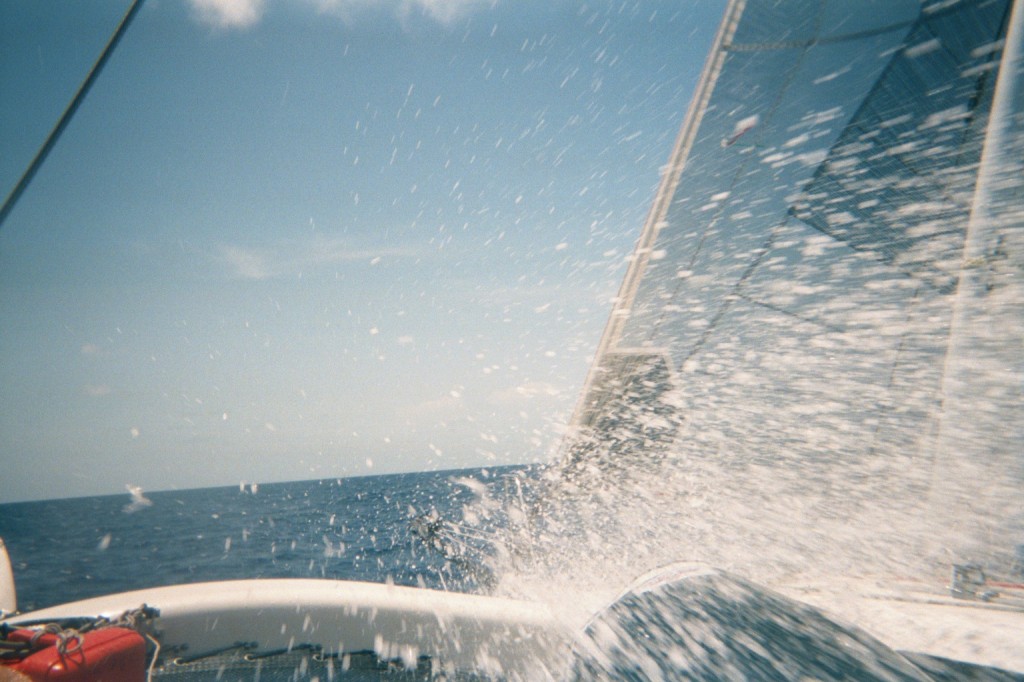 Loose Cannon touched the ramp before dark and we stopped for an evening meal well up the road by 9:00. Awesome trip.

2 thoughts on “Regatta Time in Abaco”