Sailing Tampa Bay Because ( It is there. I want to. Sounds like fun. Great Sailing. etc.) It started out to be an adventure to Miami to race in the Conch Cup but alas for reasons of National Security the Conch Cup was postponed until October. The plan to go sailing was deeply planted in my psyche so no small hiccup like National security was going to stand in my way. My  trimaran (Loose Cannon) was going sailing and I was going to be on it. Unlike many of my previous vessels, the Loose Cannon is easy to find crew for, in fact this time I resisted several offers of accompaniment. The crew for this excursion was selected for their ability to enhance my knack for dealing with the unexpected by being unprepared. Ralph Jones has assisted me before in surviving with minimal preparedness and Kerry Shane had expressed an unusual interest in just this kind of adventure so we made virtually no plans until we were on the road. Several small issues kept us from leaving as early as we would have liked on Thursday, Charley the hurricane, business obligations, all that normal stuff. When the pressure was applied, I found that I did have a plan of some sort. I announced that as long as we made the Hooter’s restaurant in Lakeland before it closed we would be on time, and on time we were. From Hooter’s we traveled southwest to Apollo Beach and the home of the Tampa Sailing Squadron. Ralph and I have been members of TSS for some years and for myself it had been much too long since I had been there. I can tell that I have not been spending enough time there because the last two times I have been there to launch my boat I was asked if I was a member. Such are the perils of starting a new business. We arrived at the club late Thursday evening and slept until sunrise. Launched the boat went to find eggs and coffee then returned to begin the arduous task of rigging the Loose Cannon. Some hours later there were hoist-able halyards, trim-able sheets, an unfurl-able jib and screecher, and an upright rotating mast to hang them on. Suffice to say thirty minutes of set-up time is somewhat optimistic to launch and rig an F-31R if you happen to be a little out of practice. One of the club members observed that there was no wind for sailing but I was optimistic. The Cannon doesn’t need much wind just to sail; it does take a little more to get past 10 knots, besides we had come to sail. We made our way out to the bay and headed for the bridge. It was light air and all we could do to get 7 knots, occasionally even 4 was a challenge. We still made it to the bridge in less than 3 hours. Upwind the whole way which provided enough breezes to keep us cool. Rigging the boat had been torturous, so hot, and so humid; we had made good use of the hose repeatedly just to keep working. (Hot weather is another factor not dealt with in the 30-minute boat setup video.) So it really felt great to be on the water with the breeze in our faces. 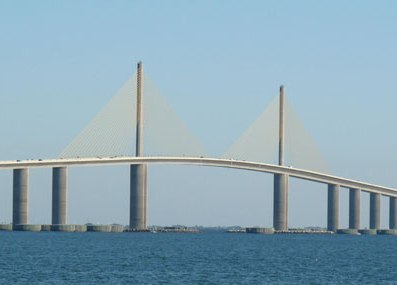 At the Skyway Bridge we fell off to a starboard reach and set the chute. Kerry had not sailed on the Loose Cannon before so he got to observe the change in behavior of Ralph and myself as we prepared and then hoisted 1000 square feet of asymmetrical kite. Yes we do take on a more intent attitude, yes we do pay close attention, yes we do communicate with the intent of being heard and understood. The gratification changes from the pleasure of smooth effortless comfortable performance to the challenge of maintaining control of a powerful machine in rapidly changing and often unpredictable circumstance. It makes me gleam.   Wind was still light, I estimate about 5-6 knots. We jibed back up the bay making 9-10 knots most of the time, heating it up in the lulls and driving off in the puffs. Life is good. We tied up at TSS and went across the street, found a seat at the bar and took care of first things first. Bill the bar tender provided nourishment and the food we eventually ordered was excellent. After a while, we returned to the boat, discussed the nature of the world and the people in it, listened to the band from Circles (next door) and some tunes from Ralph’s extensive collection before finding some comfortable accommodations and falling over.  There had been kind of a plan to be gone all weekend but we learned that Saturday was a work party at TSS so in an effort to make amends for those many parties I have not attended we joined in the project of adding decking to the multihull dock. I wielded a pencil and carried some boards while Ralph and Kerry drove nails.   I have spent some time at several different sailing clubs. I hope everyone realizes how really special TSS is. We have a tremendous facility and a whole bunch of really extraordinary people to help keep it that way.   Early in the afternoon we discussed going for lunch or going sailing and we decided on going sailing for lunch. A quick beat over to the St. Pete pier and Nachos at Cha-Cha-Coconuts 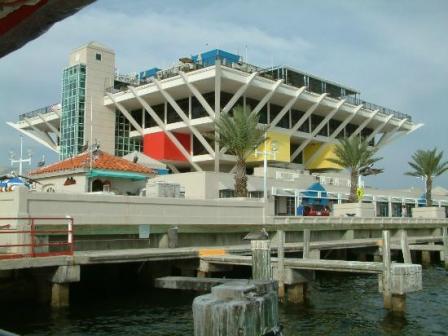 gave the wind time to shift 180 degrees so the trip back was upwind again! This time however the breeze had piped up a bit and the Loose Cannon began to stretch her legs. At 11 knots the bow lifts and she starts to plane, bear off a little and the knot meter jumps to 15. The trick then is to take it back up till the speed drops say to 12 or 13 then bear off again to heat it up. It is easier to describe here than be consistent at it but like everything it just takes a little practice. We made it back to TSS in less than 2 hours but we were too late for the Heritage potluck so we plodded back over to our new friend Bill and became renourished. Back at the boat we were feeling exceptional so we chose to go sailing. About 2 a.m. we headed out under sail and about 3:30 we anchored in the seaplane basin at Davis Island. Incredible, just the kind of sailing I had been looking to do. At Sunrise there was stirring and some complaining about “lack of moderation” but scrambled eggs, with jalepeno peppers, bacon and English muffins provided adequate energy to cruise back to Apollo Beach. Substantial recuperation was required for the majority of Sunday. The porch of TSS was delightfully peaceful and we were grateful. After several hours of sleeping Monday morning looked bright and cheery again and we were refreshed enough to de-rig and sling the Cannon onto its trailer in about an hour and a half, and only 2 or 3 showers each.   It amazes me that a few hours under sail in the company of good friends can be so rejuvenating. I am even O.K. with going back to work for a while. I am clear that two years between adventures is absurd. Two weeks is much more realistic.