Threats are over, the projects that have been hanging over my head for many years are hereby terminated, at least two of them. The Boston Whaler, purchased with the utmost of intentions, acquired an offer that was reasonably persuasive. It shall become the property of another on Black Friday. The Mirage 5.5 known as, what Bugs Bunny called a Maroon was purchased in a weak moment for a truly reasonable price as a potential daggerboard conversion project.No need to waste any words here to justify why these projects avoided fruition.

The Whaler was dragged out of the collapsed varmint hole under the right tire, into a workable space for the new owner to come and convert it to road worthy. The sale is “where is and as is”. 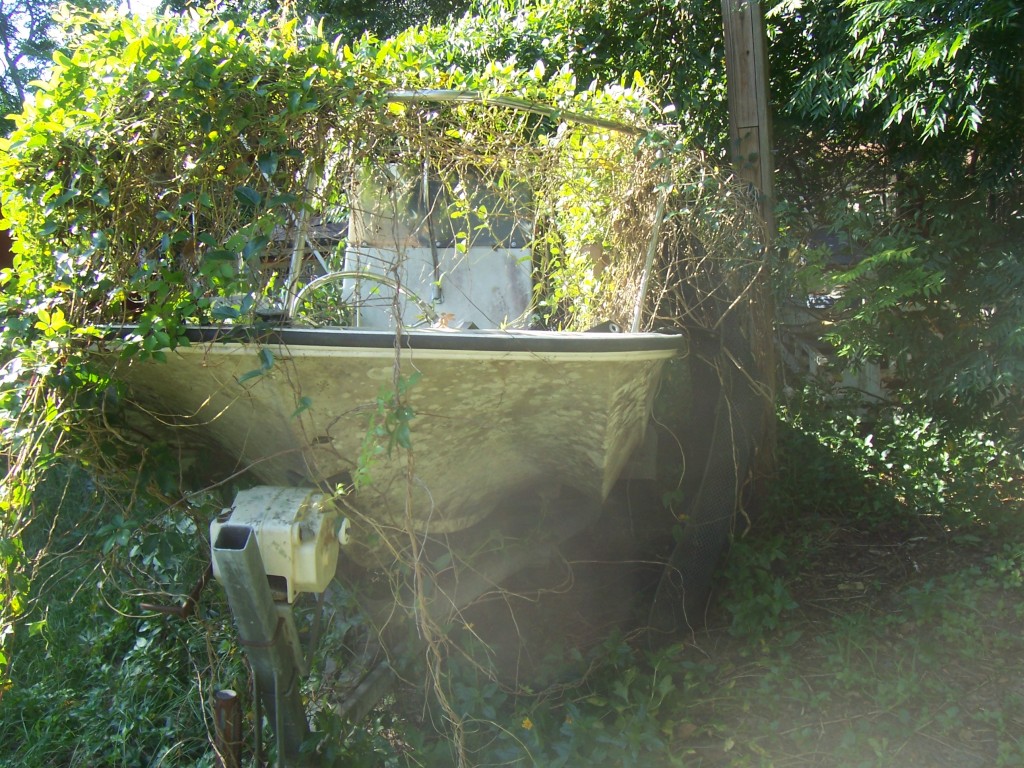 I expect my involvement to be negligible other than collecting and signing. The Mirage is a slightly different story as the only value contained therein is pieces parts, and the trailer. Once stripped of every single piece of stainless steel, aluminum, molded plastic, functional and/or reparable component, it shall become a dumpster, and be filled with a veritable plethora of items destined to decay in the county landfill. Granted, some of those items will take many thousands of years to decay, but they have decayed as much as they can in my yard.

Steve Siegfried has encouraged me to move in this direction for some time, and today he had the time and opportunity to assist me. My plans to provide mobile marine services to another Boat Yard Inc. customer and friend were altered, which created an opportunity that coincided with a flurry of motivation and Steve’s assistance. Steve and I have walked the yard many times, projecting possible scenarios for many of the projects that rest there. 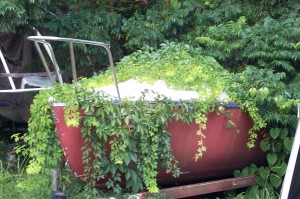 The Maroon Mirage was nearly invisible under the carpet of overgrown vines and low hanging China Berry tree limbs, the floor jack and the four-wheel-drive-low button were again employed to eliminate the grip of the thick Florida flora. There is a couple of meg of somewhat amusing video available by clicking below. (about a minute twelve)

Once removed from the consuming vegetation it became obvious that some level of cleaning would be necessary to be able to identify the salvageable components and hardware. 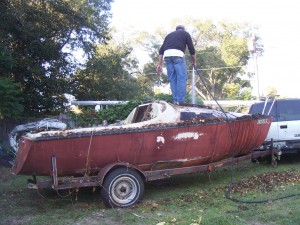 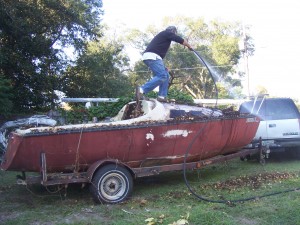 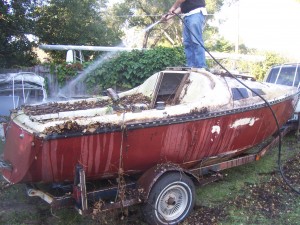 The garden hose is connected directly to the four inch well. While it is not as powerful as the commercial pressure washer it produces a stream of water strong enough to move six inch thick leaf mulch from the boat while shooting a twenty foot fountain of water back by the pool from a split in a hose subjected to the well pressure previously. In a short time a variety of valuable items became visible enough to begin an inventory. Two oversized Lewmar rope clutches, an aluminum bridge with several cam cleats, clam cleats, and fair leads, appeared on the cabin top. The mast tabernacle was obvious but a Harken micro-cheek block and two deck mounted and spring stabilized turning blocks were well hidden. Track for jib cars, one of which still has a car on it were uncovered. U-bolt type chain plates and a variety of horn cleats and a few blocks for the adjustable backstay emerged. The traveler had a visible outline, and the windward sheeting traveler car rose from the leafy muck like Aphrodite rising from the sea. 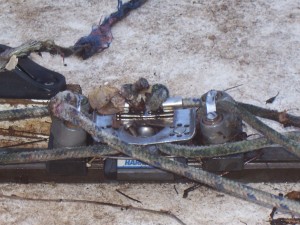 That little tidbit was the main reason I bought the boat in the first place. New it cost more than, suffice to say they are quite expensive. The pintles, the transom step, the perforated aluminum toe rail, the bow pulpit, completed the external inventory. Inside the boat was the boom, the rudder, the tiller, a sink, a pump, an anchor with rode, and a couple of fenders. Granted I knew this stuff was on or with the boat but it looks different when it is about to become inventory instead of part of an unfinished project.Too insure we were not missing any big pieces we had to clean most of the muck out of the cockpit.

I used a six inch hole saw to allow for some drainage and my trusty reciprocating saw to make a couple of additional incisions. 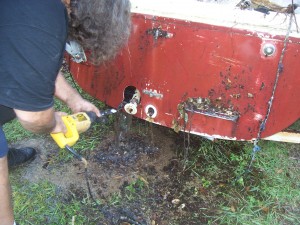 A new much more aggressive blade will be required for the Sawzall for the next procedure.