At first there was no wind whatsoever, which gave us an opportunity to idle around in circle to generate enough breeze to keep from breathing our own CO2 and relate to some of the other boats. The wind line appeared at 1:30 out of the East North East at an unusually steady six to eight knots. The course was windward leeward with the start pin being a mark of the course, and all roundings to port. Eleven boats, four of which were in the San Juan 21 class., Here are a few of the highlights from the helm of Mon Cheri, the Catalina 25.

But first, enjoy a little sailing with Patrick, Jamie and Karen on XLR8

When the race committee wants to know if you lowered your keel as you slide sideways past committee boat on the second attempt to make the line, it is possible that you may not have been focused entirely on performance.  Being “finished in place” in a handicap race is an attempt to disguise a DNF. Pressing on… The second start was much better, on the line, clear air, with speed, definitely better. At the windward mark we had to duck One Fish and Two Fish, Red Fish sailed on. Bluefish snagged the improperly weighted (cough, cough, hrmmmph) ground tackle, hit the mark and the cute little rudder snapped up like a flag as the Sunfish proceded to do the required penalty turn unintentionally. The Catalina was moving pretty well by now. Chances of me slowing down just for a Sunfish are pretty small, in fact, the Blue fish could have provided some needed growth removal. Mindy’s expression indicated that she believed I really was going to give the bottom of the Catalina a quick brushing. What the heck we had steerage, I avoided her as she scrambled back to reset the rudder. After the finish of that race we missed the raising of the class flag and thought someone must still need to finish. As we neared the RC boat I realized that the Prep flag was up and by the time we found out the time, we had a minute twenty left. Actually it was the best start we had all day.  Crossing the transom of the RC with 2 seconds to go, the other fish was sitting there luffing. I avoided the boom of the Redfish just long enough to get under it and probably would have come up enough to touch it but the whistle blew (whistle? Could we get a proper freakin sound signal for our club races please?). Paul, yanked the mainsheet, shoved the tiller down, jumped to the rail and the fish jumped like a salmon avoiding a bear. I didn’t see him again until Wolfy’s.  Ok, our start wasn’t as good as his but it was pretty good.  We were windward with speed and no one crossed in front of us.

Tacking was had been expensive all day so I was intent on making the port layline. I heard the skipper of Just Us holler starboard but I was on starboard and figured this was not my problem.  Bob checked to leeward just in case and said we had Show Me pinned. Apparently they were watching us closely for an opportunity to tack, but I am thinking, hey it is only a couple of miles to the city of Enterprise shoreline. Let us see if they know to call for room to tack at a continuing obstruction.

It made me proud to find out later that Show Me’s crew  (not to mention names, Steve Hayden) was aware and even apprehensive that I might be inclined to take advantage of such a situation, and even expand upon it if possible.  Andy knew that Show Me would have to tack and duck and yes, if I could have slammed that door or tacked on top of them I would have but, I mentioned accelerating out of tack was not really working for us, did I not? We let them go.

On the second downwind leg of the third one lap race, yeah I didn’t get that either. We were searching for the start line pin that we had to keep to port but it no longer seemed to exist.  Ah there it is, just about to round the leeward mark ahead of us.  The first pass and unsuccessful rescue made it clear the rode was no longer connected to an anchor, the third pass got the mark into the cockpit. By this time most everyone was headed in. We assumed racing was complete for the day. Many  lessons were available for learning this day.  Knot tying, keel dangling, whistle blowing, rode snagging, and of course I am sure that there were problems at the front of the fleet as well. 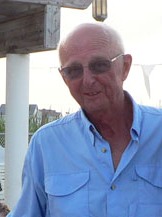 I heard Fisk was a couple of microseconds late for a start and an unsubstantiated  rumor about the Viper and a starting pin. I would really like to do some serious racing but in the mean time, laughing at ourselves is important too.

Thanks to Byron and Scarlet and Bill for stepping up at the last minute to fill a RC vacancy.