Team Rumplemintz or How Far is Cancun Anyway?

Race committee abandoned because the wind was too much for the little boats. That did not apply to the Loose Cannon. We were there, the boat was ready, and it didn ‘t really look that bad.  Team Rumplemintz voted, unanimously. 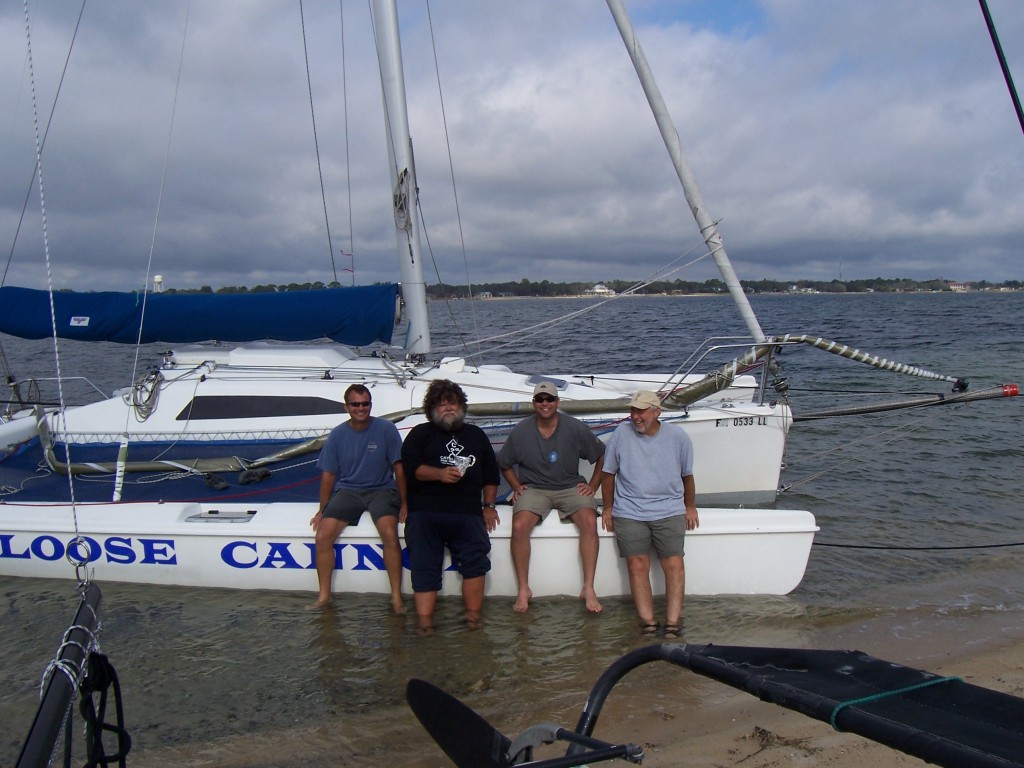 Randy Smyth must have thought it didn’t look too rough out either. He pulled out of the hidden canal from the back of his house, maybe a thousand yards ahead of us in “Yo” the carbon fiber F-25C. Chasing Randy is one of my favorite things, it is always educational and once in a great while I can catch him if he happens to be sailing a slower boat. Yo, does not fall into that category while he is sailing it by the way. Our team consisted of Andy, Kerry, Kyle, and myself. We had been doing ok the day before, and today there was plenty of wind, maybe today was the day. Much too quickly it became obvious that today was not going to be the day, but he was kind enough to demonstrate some of the fundamentals he keeps talking about at his seminars. I don’t really know if he always sails like this or it was just because he had all his kids and his dog with him, but he did not seem to adjust the sails at all. From our perspective he looked like a water spider, changing direction instantly with every shift and puff. It looked jerky and erratic, but it looked jerky and erratic from a lot further away.

Shortly it was clear that he was headed out under the Destin bridge, and we had to vote again. Come on guys he has his kids and his dog, it can’t be that bad out there, so we followed. I missed the light in the center of the bridge with the mast, I guess the third time is a charm. Ah, Randy looked to be going to lunch in the Destin cove.  It doesn’t look that rough out there, let’s go out in the gulf, we can always turn around, right?

We rounded the bouy at the  North side of the inlet and fell off a little. Full mainsail and the racing jib. We settled in at about seventeen knots hissing across the tops of the waves, and it felt like we were on tracks. I am thinking to myself that at this rate we could be in Cancun by morning.  Two good size fishing boats, I figure thirty foot walk around types were really struggling to get over the waves. I was surprised, but they were behind us. At least one of my crew was a little more tentative,  probably sensible, all life jacketed and such, he appeared even more concerned when I wasn’t really sure if my vhf radio worked. It did not take very long to see that soon we were going to be out of sight of land, and at least two of the four of us felt the need to return home. I still think we could have made Cancun for breakfast, but we turned around. If I get going like that again, on that course at that speed, I will be planning on having Tequila with my huevos rancheros.