The three models of the San Juan 21, Mark 1, Mark 2, Mark 3 have long generated the question which one is the fastest. San Juan 21’s are one of the longest running one design fleets in the US and are particularly active on both coasts. Partially because they were manufactured on both coasts but more importantly because it has an active class and all the boats are competitive. There are numerous articles about the differences between them, and I am not an authority on those details. I have owned Mark 1’s and Mark 2’s, and raced both against both and have developed an opinion over the years. I have been impressed with how competitive all the models are. There is a lot of data available by looking at the scores of past competitions and I have done a modicum of researching that data. I am sure that others may have a different opinion but I am convinced that the boats are all very competitive if properly prepared and properly equipped. The original manufacturing quality controls seemed to have created a very consistent hull and appendages. Class rules do have a minimum weight requirement and modifications have been somewhat limited.

So, the fastest San Juan 21 has a fair and stiff hull, with properly faired foils. The weight should be at or near the legal minimum. I think the keel gasket is critical although the type of gasket is not so important to speed as it is to maintain-ability. The small fairing for the front of the keel slot is good but the standard gasket properly installed and in good condition is surprisingly effective. Good sails, properly adjusted standing rigging, and effective running rigging are critical to performance on every model. Preparation is critical, but it has to be preparation that works. Prepping the hull to a high gloss is fine but some of that time might be better spent tacking, jibing, hoisting and dousing. Controls to adjust the sails effectively are also critical but if running rigging is so complicated that it is too much trouble to put together, it can keep from going sailing. If it is too complicated it can cause mistakes or actually be a distraction.  If the jib dousing line gets tied to your jib sheet while you are trying to attach the 4:1 twing to the high compression stereo hydraulic spinnaker pole topping lift, you are going to be SLOW.

The BEST model, not the fastest, is the one that is best for you. I require a Mark I because I want the bigger cockpit. I don’t use a traveler because I want the bigger cockpit. All my halyards are secured to the mast because I don’t want to spend any more seconds rigging at the ramp than absolutely necessary. Granted, the way that my controls are secured on the mast is not common but it works for me 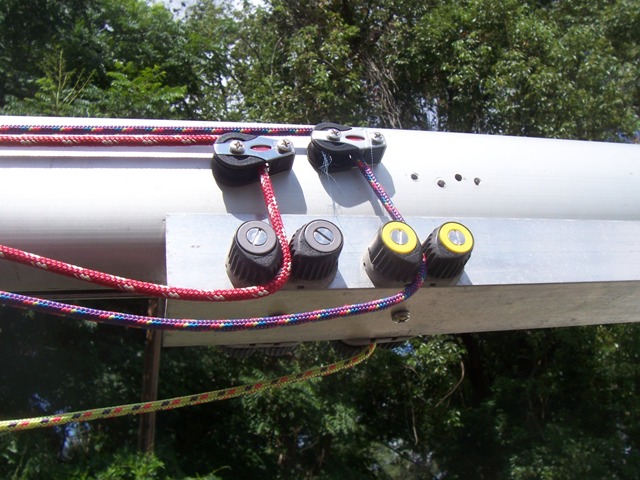 . I have over rigged a number of boats, especially Catalina 22, and San Juan 21, and as the femtoseconds pass me by I am learning the elegance of simplicity and functionality. In summary I say the fastest San Juan 21 is the one that you can sail the fastest, which almost without any contradiction is the one you like the best, and the one you spend the most time on. If you want a fast San Juan almost the only thing you HAVE to do is sail it, often, make it work the way you want it to and watch the tell tales.